Home » Blog » Why Newspapers Are the Most Credible Source for News

According to the Institute for Public Relations’ most recent Disinformation in Society Report, newspaper journalists rank as the least-biased, most reliable news source in the eyes of the American population. Even more telling, local newspapers were cited as the most trustworthy source of news in today’s ever-contentious media landscape.

However, it’s hard to ignore the elephant in the newsroom — media polarization, “fake news” and broader toxic political rhetoric have proliferated recent public discourse, creating a bleak atmosphere for anyone trying to find credible news outlets. More and more, what one group considers factual, authoritative news, another decries as misleading, even made up. Combined, the state of news is left in an identity crisis — and audiences with it.

How can newspapers help restore the public’s faith in quality news journalism? What skills can you learn to help understand bias in the media, sorting quality news coverage from the pack?

When people search for credible news sources, most often they mean publications and broadcasts that are fair, reliable, balanced, authoritative and based on verifiable facts.

These metrics are intuitive. However, there is no single, objective system to measure traits like fairness or authority. Herein lies the problem with identifying credible versus noncredible news sources, as well as the dizzying and increasing debate behind polarized news platforms in the United States and beyond.

Generally speaking, though, when polled, the general population agrees that these characteristics underlay what it means for news to be reliable, trustworthy and veritably factual:

The term “fake news” dates back to the 1890s. This period marked an explosive uptick in the number of print newspapers available for public consumption, particularly within major urban centers like New York, Chicago, Atlanta and San Francisco.

These papers, often fighting over the same readership, turned to sensationalized “yellow journalism” tactics to entice more citizens to buy their broadsheets. Common yellow journalism tactics often sound familiar, even over a century later — exaggerated or misleading headlines, one-sided sources, aggrandized language, opinions conflated as facts and, most pressingly, little to no authoritative statistics or figures contained within its content.

Today, fake news has resurfaced as part of the everyday lexicon. Conversations around the state of contemporary media seem to invariably lead to the idea that most news major sources push a particular social and political agenda, and that agenda qualifies the station, publication or website as biased.

The true definition of bias in the media — and particularly in newspaper journalism — can be healthily and functionally identified according to the following traits:

Knowing how to find the most accurate news sources is an increasingly urgent skillset to develop.

The following newspapers have been selected as some of today’s more credible, reliable sources of news. To compile this list, we’ve used findings and information from three primary bodies:

The Associated Press is a nonprofit news cooperative that publishes a wide array of trending news and investigative reports. It maintains no shareholders, no corporate sponsors and doesn’t rely upon or take government funding, operating overwhelmingly from its syndicated content re-published by other newspapers. In fact, savvy newsreaders might note that AP often shows up in the bylines of other papers and articles, as the AP frequently is the first to break news stories.

The AP is rated as a centrist or politically centered medium. It enforces rigid journalistic standards for its staff writers to adhere to, including editorial guidelines on how to avoid left or right-leaning connotations within content.

The Wall Street Journal is the only major newspaper brand that Americans trust more than they distrust across political identifications, according to research from Pew. In that vein, the Wall Street Journal maintains one of the most diverse demographics of readers of any U.S.-based newspaper, stretching across socio-economic and political categories.

The BBC is an international news production conglomerate owned and operated by the British government. It is also the largest news broadcaster in the world, publishing content across all six inhabited continents.

Surveys from Pew and AllSides.com reveal BBC is considered more reliable and trustworthy than untrustworthy among the majority of ideological parties in the U.S., with one exception. Individuals who identify as “strong” or “consistent” conservatives are equally as likely to rate BBC as trusted and distrusted.

The Economist is a London-based, weekly newspaper printed in magazine format. Its print circulation regularly exceeds over 1 million weekly readers, over half of which are in the United States.

According to Pew, The Economist maintains one of the highest ratios of perceived trust to distrust of any news publication in the eyes of the American public. Since its inception in 1843, the newspaper has regularly promoted issues on both sides of the traditional political spectrum but maintains a particular affinity for free-market capitalism alongside practical social progressivism.

USA Today is a Virginia-based daily newspaper that provides headline news, features, editorials and entertainment coverage of trending domestic and international topics. It is one of the most circulated and widely read national newspapers in the country, lauded by media watchdogs and nonprofits alike for its proper sourcing practices, fact-checking and editorial transparency.

AllSides awards USA Today a center rating based on two blind viewer perspective surveys, consumer feedback and its own internal analyses. Within the blind surveys, participants are asked to read and rate articles as biased or unbiased without knowing what publication they came from. Only when participants are aware that content comes from USA Today were they likely to rate it as left-leaning, compared to the majority center-rankings of the anonymous survey rounds.

How to Identify Credible News Sources

Media literacy skills are becoming increasingly valuable. Luckily, they’re also easy to cultivate. Keep these tips in mind as you read, watch or listen to news stories over the next few weeks to help foster a better radar for credible versus noncredible news outlets. 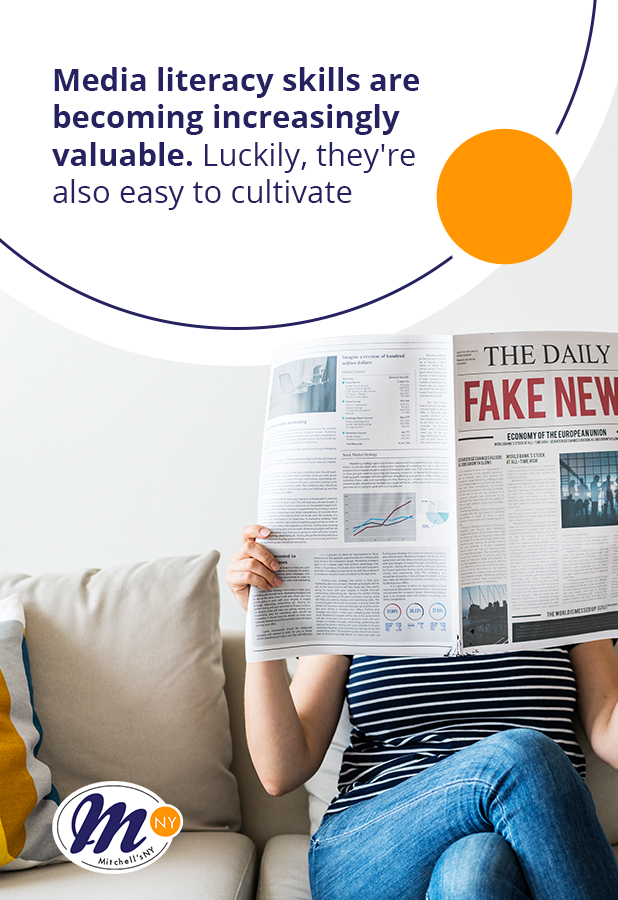 First and foremost, consider where the money comes from keeping a news source in business.

Newspapers and websites may be owned by parent organizations with vested interests in supporting only certain narratives. On a smaller scale, sponsored articles or content can come from a business looking to make money off stories designed to look like news, not marketing.

Who owns a newspaper or news source? Who’s written the story itself? If it’s a paid article, is the sponsorship notice clearly and explicitly stated in a place audiences will see? These funding concerns have a significant impact on the underlying motivations of news coverage.

2. Find If the Most Affected Have Been Included in the Coverage

Well-rounded news articles will contain information gleaned from numerous sources. Likewise, credible news journalists will go to great lengths to substantiate the accuracy of their sources’ knowledge, bolstering their own standards and reputation.

While stories do not necessarily need to contain quotes or sources covering every side of a topic, they should generally nod toward the most pressing and effected. For example, does a piece covering expanded mental health funds for veterans actually quote veterans? Or does it only contain soundbites from local politicians sponsoring or opposing the bill?

These perspectives should also be presented using non-sentimental language and objective tones. This ensures those with the most at stake in issues have their voices heard without crossing the media-bias border.

Much research has gone into news coverage double standards in print and broadcast journalist. For example, take media coverage of a trending criminal court preceding. If the defendant is a person of color, news articles will more often publish the defendant’s mug shot. However, when the defendant is white or caucasian, newspapers have been shown to publish “every day” photographs, even ones submitted by the family or taken from social media.

Even seemingly small details like accompanying photographs can trigger strong, prejudicial responses in an audience. Keep track of such double standards in parallel stories as well as the language and images used to complement coverage.

4. Analyze Where Stories Are Featured

Story placements have a huge impact on how many people will see or hear them. As a result, stories featured in journalism’s “prime real estate” segments will have a far greater influence on public opinion than those in less visible pages or time slots.

In print journalism, above-the-fold placements are prized — meaning headlines and stories on the front-face of a folded newspaper. In broadcast journalism, stories at the top of the hour tend to capture the most attention and create the largest impact.

Pay attention to the headlines you see in these prioritized positions. Contact publications when you feel important topics have been tucked into less-visible areas. You can also inquire as to why they chose to lead with a particular story over another.

5. Consider the Tone and Language

Note the way media frames an issue. Is the language in the article or broadcast fluffy, descriptive and, at times, emotionally driven? Does the author or news anchor use the first-person, interjecting their own commentary? Is “loaded language” employed at any point — words or terms crafted to trigger a strong emotional reaction in audiences?

Examples of loaded language abound. Consider articles that interchange the words “kill” and “murder,” “illegal aliens” and “undocumented immigrants” or “terrorist” with “extremist.” The use — or omission — of one term leads readers to form completely different impressions of an individual or news event.

6. Check If the Headline Matches the Article

Under-researched or biased news articles often come with particularly attention-grabbing headlines. By contrast, credible news sources will tend to employ numbers or data-based headlines indicating the most important takeaway of the article itself. This helps time-pressed readers skim headlines to glean the objective gist of the article, whereas “clickbait” entices the viewer or reader to click for more.

It’s important to remember that most news headlines are not actually created by the writer. Headlines offering sensationalized or distorted takes on a larger article devalue the rest of the content as well as fuel the wider problem of fake news.

When in doubt about the slant of a particular source, look up more! Search the same story or topic across numerous newspapers and online publications. See what facts are presented using what language. Look for who’s quoted. Identify consistencies in the story as well as what’s left out. These choices are intentional.

While it’s nearly impossible to scrub some form of human bias from human-created content, we can all be more diligent in separating the sensationalized from the informative.

Get Unbiased World and Local News Delivered to Your Door

Quick, convenient, reliable and personalized. That’s what Mitchell’sNY delivers to our family of customers who can’t spend a day without reading their favorite newspaper.

Explore our NYC-area magazine and newspaper delivery service, as well as our international publication offerings to bring real news back to your doorstep.